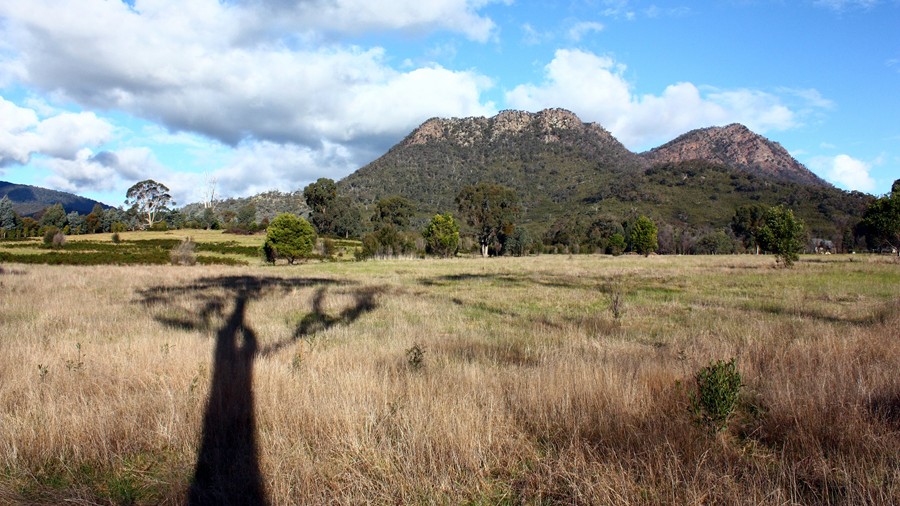 Every couple of months I like to jump in my car and take a drive out along Maroondah Highway, heading north-northeast away from Melbourne. In no time I have left behind the outer suburbs and entered the wine country of the Yarra Valley. I keep going, passing through the town of Healesville and winding up and over the Black Spur, part of the Great Dividing Range and home to massive Mountain Ash and tall Tree Ferns. I continue on and eventually descend into open farm country. Just after I pass through Buxton, a rocky escarpment looms into view on the right-hand side. It’s steep, rugged slopes and razorback ridges seem out of place here, but I guess that’s what makes the Cathedral Ranges so appealing.

From the highway it’s only a short drive along Cathedral Lane to Little River Road and then to one of the parking and camping areas where the walking tracks begin. Meandering through the valley is Little River, whose crystal clear waters come from the numerous freshwater springs that trickle down from the mountains. It’s a beautiful place to sit and rest for a few minutes before tackling the fitness-testing climb to the ridge. 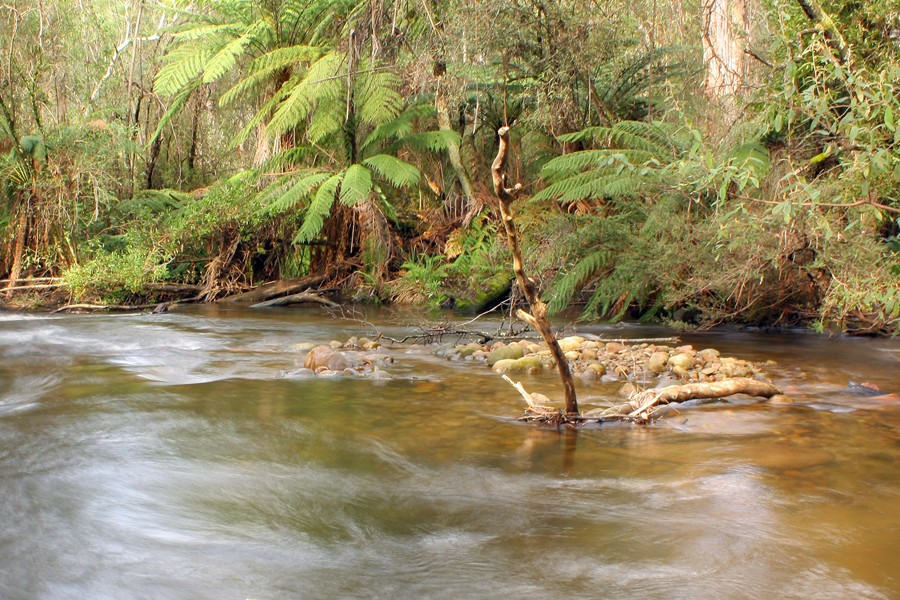 The waterways keep the life blood of the forest flowing and they support all manner of creatures. Freshwater crustaceans and small fish can sometimes be seen scouring the creek beds for a tasty morsel, and skinks often prowl along the waters edge looking for an insect meal. This is also the ideal habitat for Dragonflies and their smaller cousins the Damselflies. The streams themselves are the perfect environment for their aquatic larvae to develop, and the surrounding bush offers a smorgasbord of small insects to dine on.

Way down beneath the canopy of tall trees lies another world, a miniature world that a lot of people rarely notice. Dense forests of moss cover the rugged slopes of a blackened tree stump, a victim of the savage fires that devastated so much of the region in 2009. Towering above the moss, forming its own canopy, is a mighty three-centimetre-tall toadstool. To some creatures, even this is a land of giants. 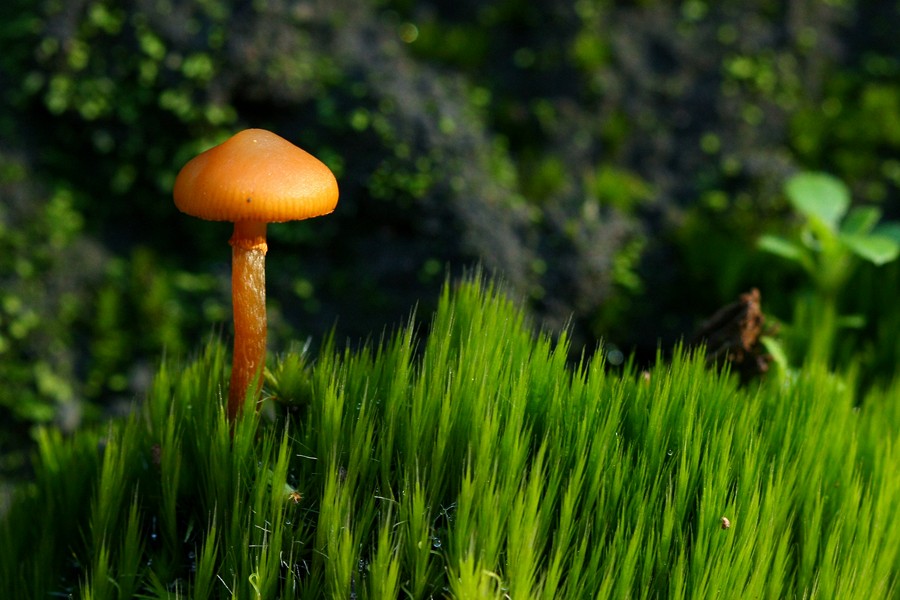 The cool, damp understorey is also a place for Cream-spotted Ichneumon Wasps (Echthromorpha intricatoria) to gather and seek out a mate. This female seems quite content to sit and wait for a male to come to her. 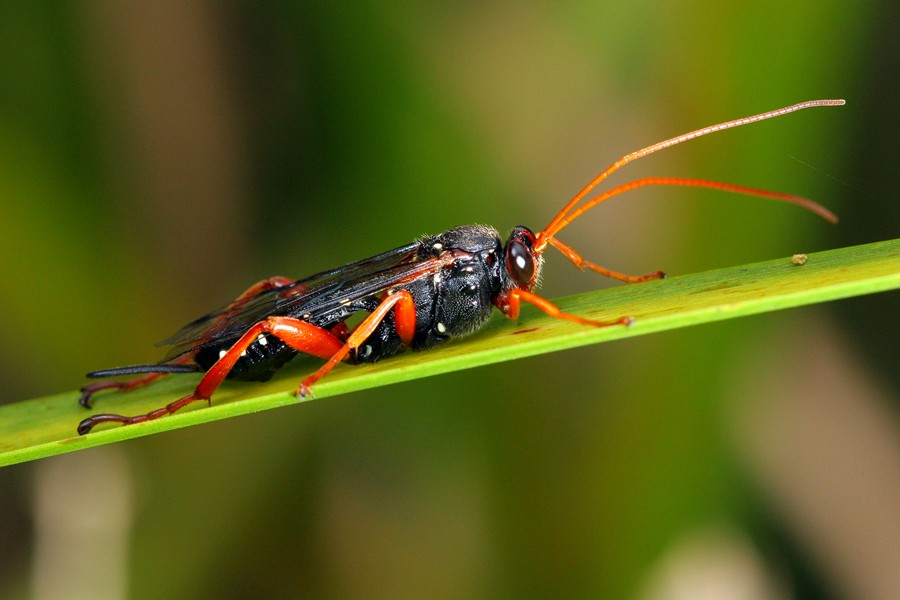 The various species of Eucalyptus that cover the ranges provide an endless supply of food for many insects. Perhaps one of the most spectacular leaf-eaters is the large and beautifully adorned Helena Gum Moth caterpillar (Opodiphthera Helena) from the family Saturniidae. At 8 centimetres, it is more than a mouthful for most predators and the covering of short hairs, blue wart-like knobs and red spots give it the appearance of something distasteful, which it must be if it eats gum leaves all day. But the whopping size doesn’t end there – the moths have a wingspan of as much as 17 centimetres! 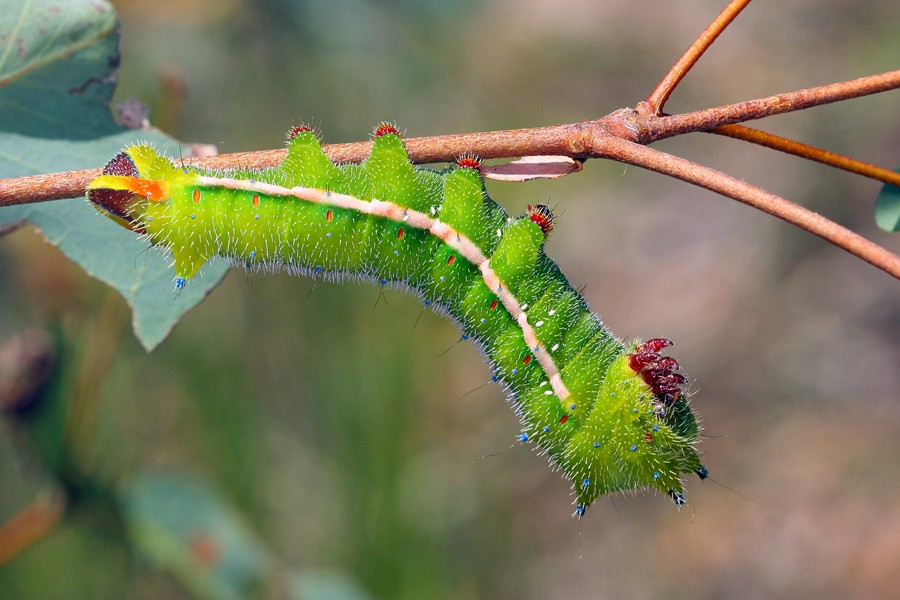 There is always going to be the occasional oddball along the way. Members of the fly family Acroceridae are commonly referred to as Small-headed Flies and it’s pretty obvious where that title came from. It is a common trait amongst flies for the males to have eyes that are very close together or even touching, but this Mesophysa ilzei has taken it to the extreme with eyes that not only touch each other but cover its whole head. I wonder what the world looks like to them? 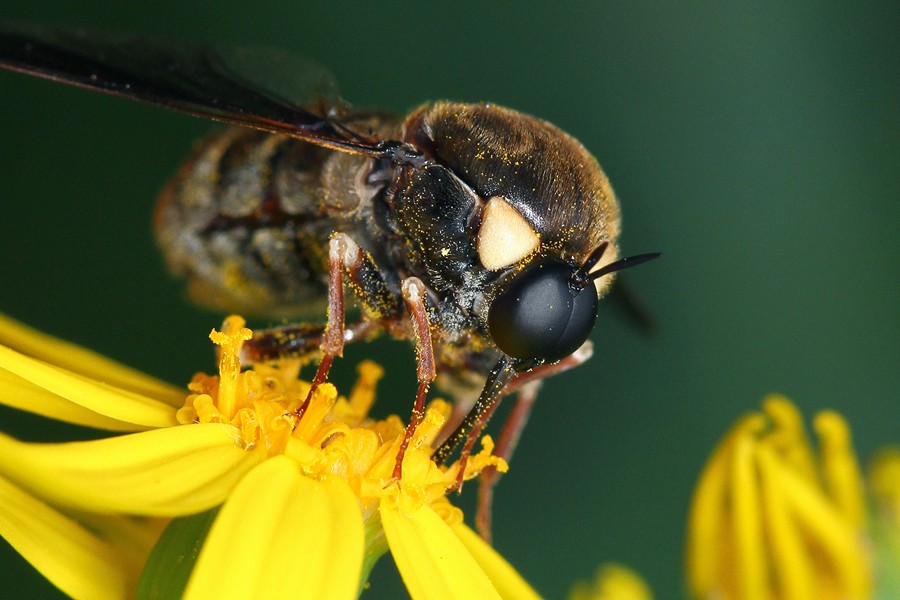 During Spring and Summer there is an ample supply of pollen and nectar for the insects and birds to feed on, thanks to plants and trees like Cassinia, Bursaria, Acacia and Eucalyptus to name a few. There is also plenty of Leptospermum (Tea-tree) around, where many creatures share in the bounty. Brilliant metallic Aethyssius species beetles (family Tenebrionidae) scramble over the flowers and dive in head first for a rich feast, while the more demure Painted Lady Butterflies, who have the very lady-like taxonomic name of Vanessa kershawi, delicately sip the nectar with their long, slender proboscis. 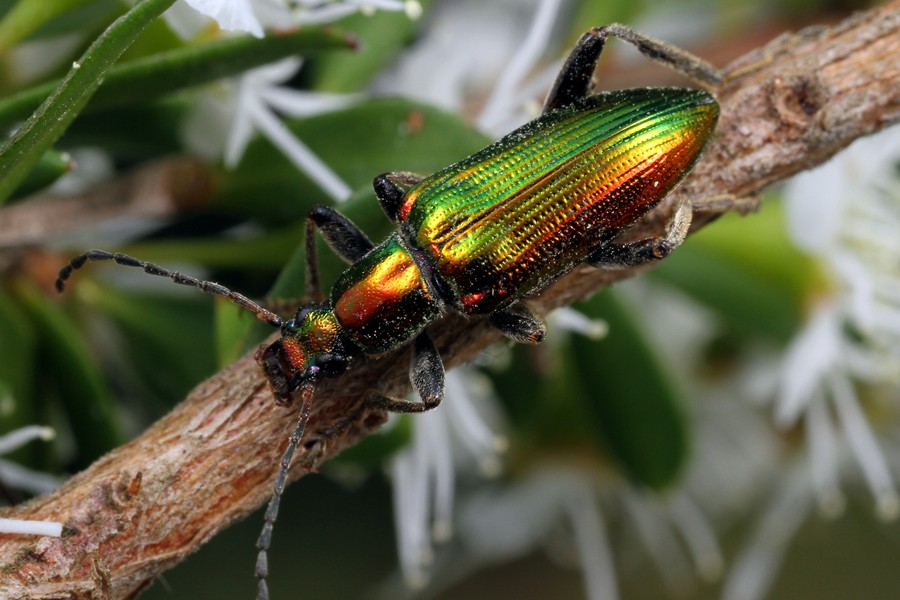 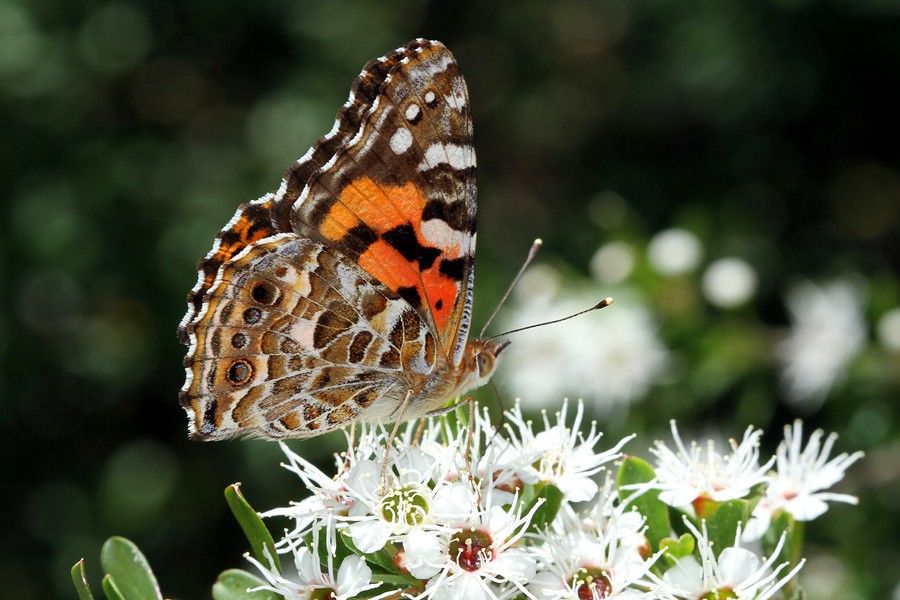 After a steady and sometimes taxing climb, you clamber up and over a few rocks and you are suddenly confronted with breathtaking views in almost every direction. The knife-edge ridgeline drops away to the valleys below and the only sounds are the wind, the birds and the gentle buzzing of insects. There are few better places to stop and rest your weary legs before facing the knee-jarring descent back to the carpark. 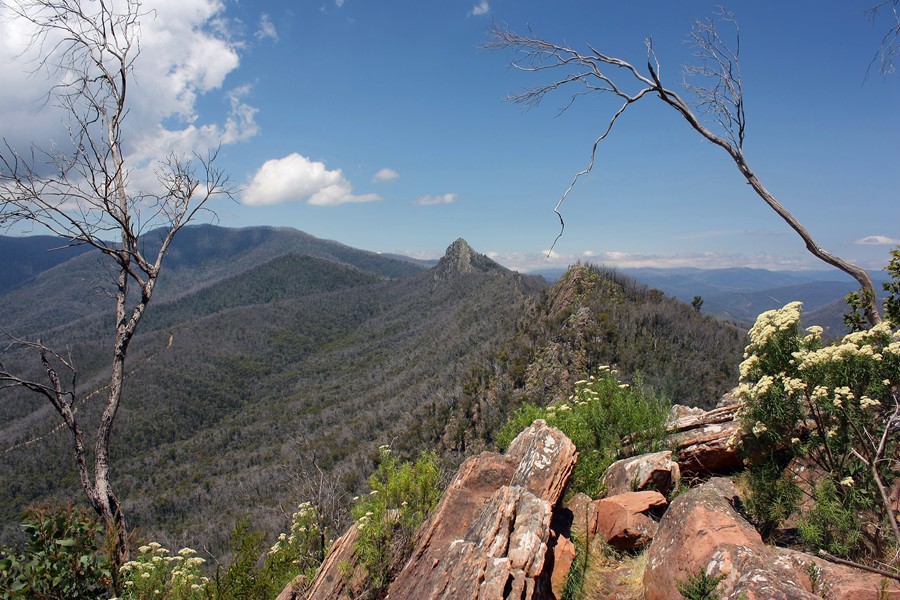 Sometimes the nicest surprises are at the opposite end of the size scale. Below is one of the astonishing little Peacock Jumping Spiders from the family Salticidae. At less than 5mm long, this male Maratus volans is by no means a giant, but what it lacks in size it more than makes up for in splendour. As with other male Peacock Jumping Spiders, the brightly coloured flap on its abdomen is raised up like a peacock’s tail during its courtship display. This one, however, was more interested in searching for a meal than a mate. There must be many more weird and wonderful invertebrates living their secretive lives in the park, but even if there wasn’t, the picturesque landscape is enough to draw me back time and again. 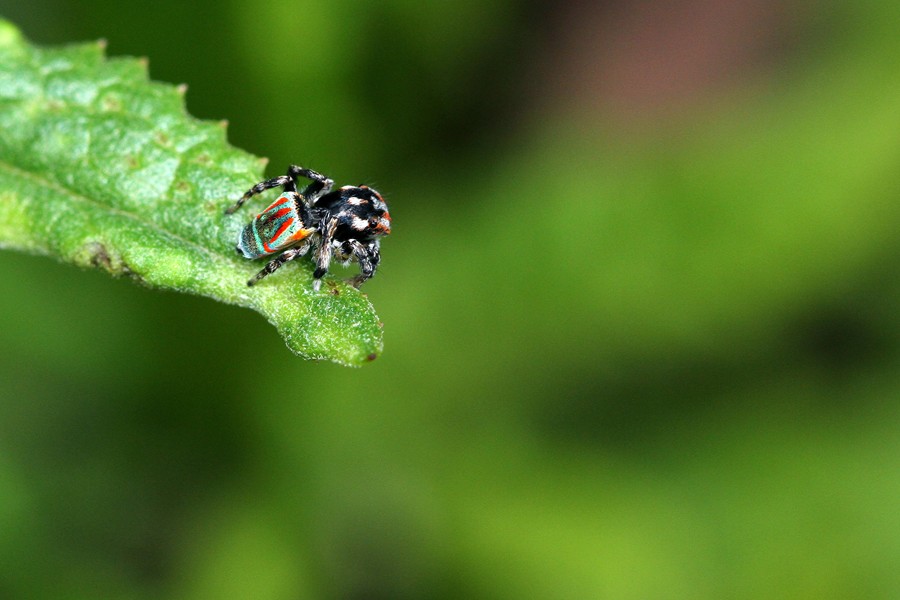