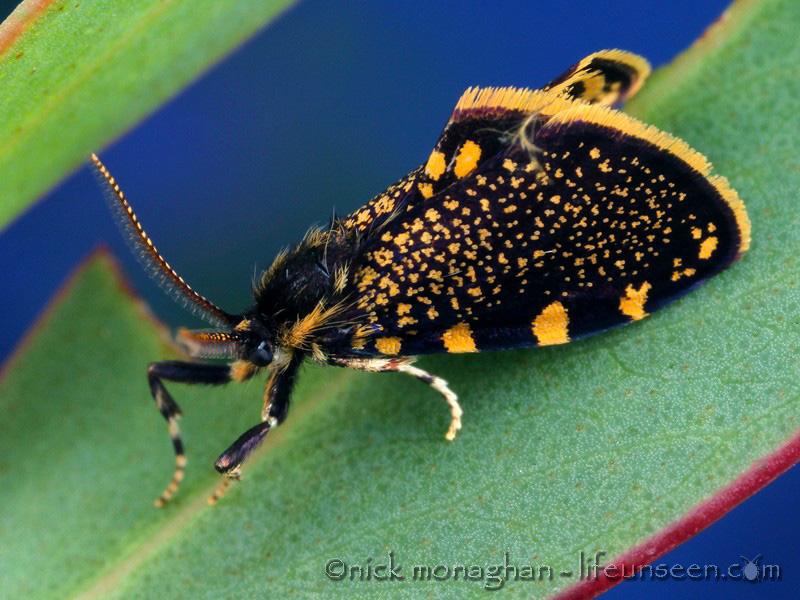 I think it’s fair to say I underestimated moths. Like many other people, I really didn’t pay too much attention to them in the past and assumed they were mostly dull grey or brown creatures that hung around lights at night and disappeared during the day. It wasn’t until I started my journey into the world of macro photography that I began to realise there is so much more to the humble moth.

It is true that some of them are dull grey or brown, but there are many, many more that are anything but that and there are a few that give their more popular cousins, the butterflies, a run for their money. As is the case with many of the insect groups, the more I find, the more I am in awe of their diversity and beauty, especially when it comes to some of the smaller moths. They can also present quite a challenge when it comes to getting a photo, so when I do manage to capture a particularly beautiful species before it disappears from sight, it is a moment to remember.

These are some of the stunning little moths that I have photographed over the last few years. I hope there are many, many more to come. 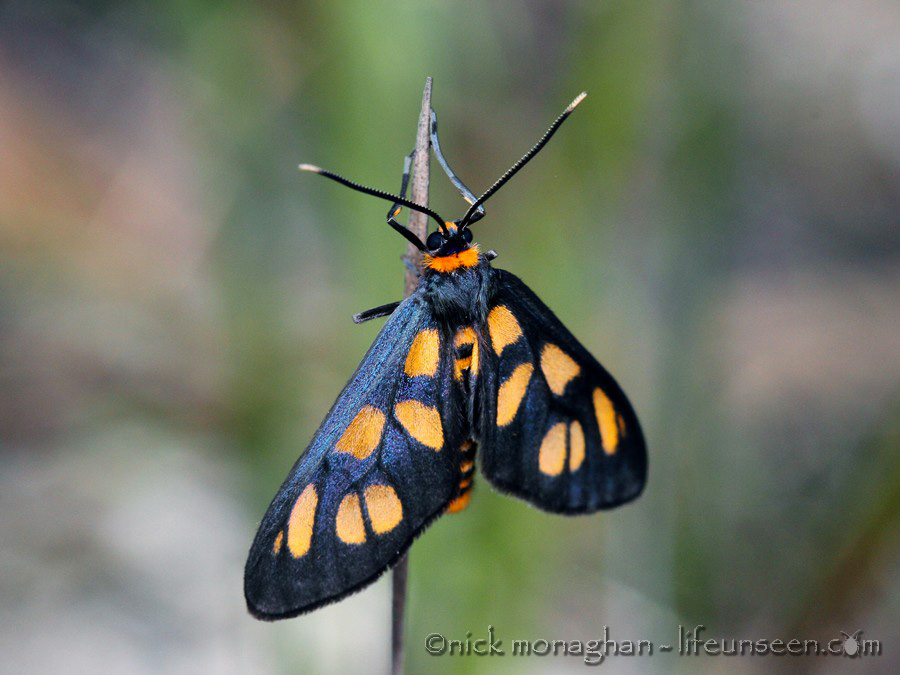 It’s easy to see why they are often called Tiger Moths. This is a common species in southern Queensland and there were several of them drifting about amongst the shrubs on the morning I visited Girraween National Park in October, 2014. Whilst many moth species are nocturnal, there are a large number that are also active during the day. This particular moth was resting in the sunlight, perhaps using the sun’s energy to warm up its flight muscles before it headed off to feed on the nectar provided by the many flowering plants in the park.

In a world where the line between life and death can often be wafer thin, any advantage that can be gained for the sake of survival must be exploited. On the left is a beetle from the family Lycidae. These beetles are toxic and most predators are aware of that fact, so the beetles’ colours are associated with something inedible. Snellenia lineata and many other insects, including other beetles, have evolved to mimic Lycid beetles, thus giving the impression that they, too, are unpalatable, even if that isn’t always the case. It may not be a convincing match to you or I, but it’s enough to fool most predators. 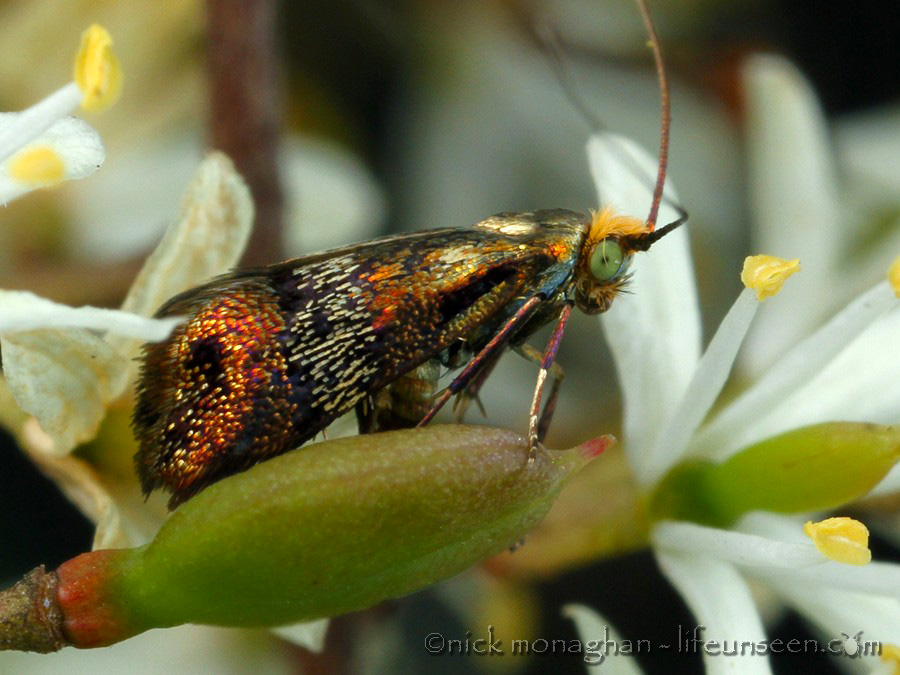 Adelidae is a family of moths commonly referred to as Fairy Moths and I think it’s an apt description. These dainty little moths can be seen fluttering about amongst flowering plants during Spring and Summer and their metallic wing scales shimmer like fairy dust in the sunlight. They often go unnoticed due to their diminutive size – their wingspan is usually not much more than a centimetre – but when you look at one very closely, you soon realise just how beautiful they are. It’s hard to believe that so many colours can fit onto such a tiny creature. 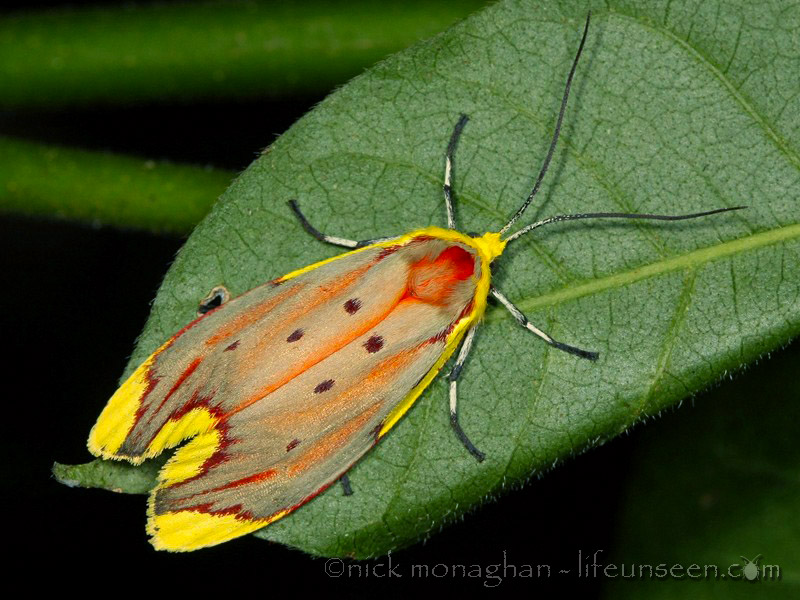 Every so often, there are days when the wonders never cease. On a day out in Kondalilla National Park in November, 2011, I seemed to have the greatest run of luck, running into one fascinating creature after another. Just when I thought it couldn’t get any better, I spotted something poking out from under a leaf that caught my eye. It looked like a leg or an antenna belonging to an insect, so I slowly and carefully turned over the leaf and was greeted by a vision of splendour. I had seen photos of Eustixis sapotearum prior to this moment, but nothing could compare to seeing the real thing. I reeled off shot after shot, more than 20 in all, and I still don’t think I have done it justice. Definitely a “wow” moment. 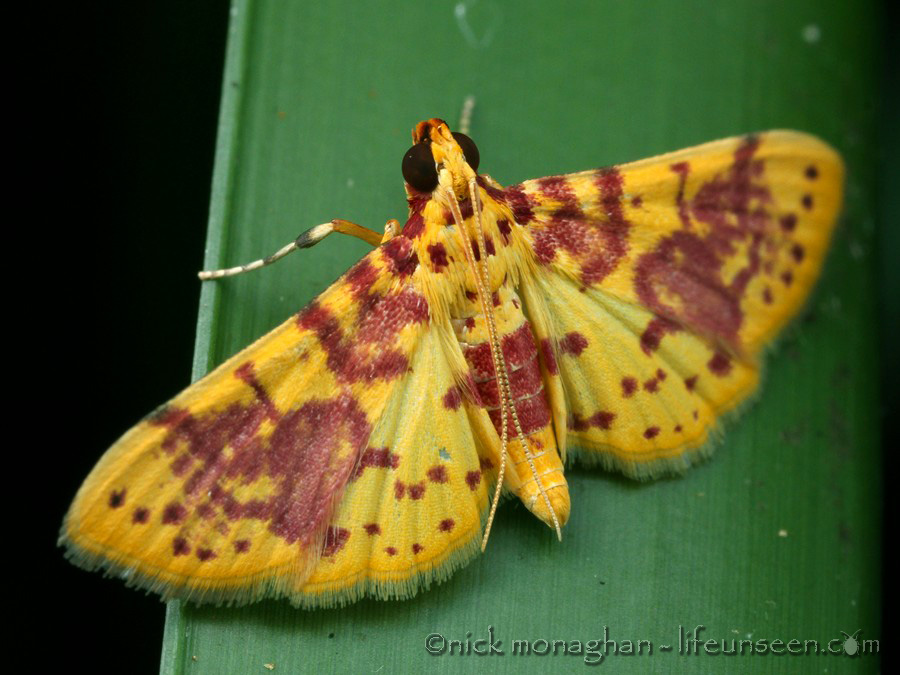 I first encountered one of these small moths in my garden in 2005 when I was living in Tewantin on the Sunshine Coast in southeast Queensland, and I have only seen two others since that time. The colours are the first things that catch the eye – the canvas of yellow with an overlay of red dots and splotches – but when you take a really good look, you may notice what looks like a skull and cross-bones on each wing. If this moth was given the common name of “Pirate Moth”, I wouldn’t be surprised.

The common name, Australian Bagmoth, may not necessarily capture the imagination, but the moth that bears this name certainly does. Caterpillars from the family Psychidae live in bag-like shelters constructed from silk that sometimes have small twigs woven into them. It’s not just any stick thrown in, either; they are usually uniform in thickness and cut to exact lengths, resulting in a small feat of architectural wonder. But in this particular case, it is the moth that draws the attention. The male (pictured above) is rather eye-catching with its prominent yellow spots on a deep brown background, but the female is even more intriguing. She is wasp-like in appearance and has a rich satin sheen with yellow markings, and the wings are too short to allow her to fly. Fingers crossed I can find one of them soon.

It’s not often I encounter different species from the same family on the same day, but on an extraordinary day out at the Cairns Botanic Gardens in north Queensland, I had the good fortune to photograph four species of Metalmark Moths in the space of a few hours. What makes this special for me is that so far there are only 13 described species from the family Choreutidae in Australia, so I managed to record 30% of them in one day. And to cap it off I found two more species during that particular trip, bringing the total to six species in two weeks. Pictured left and right above are Choreutis periploca and Choreutis limonius respectively, and in the middle is Saptha libanota, one of the most magnificent little moths I have ever had the privilege to see. It was one of those moments when I was terrified that the moth would fly away before I could get a shot, but luckily for me it stayed put despite my intrusions. Yet another “wow” moment. 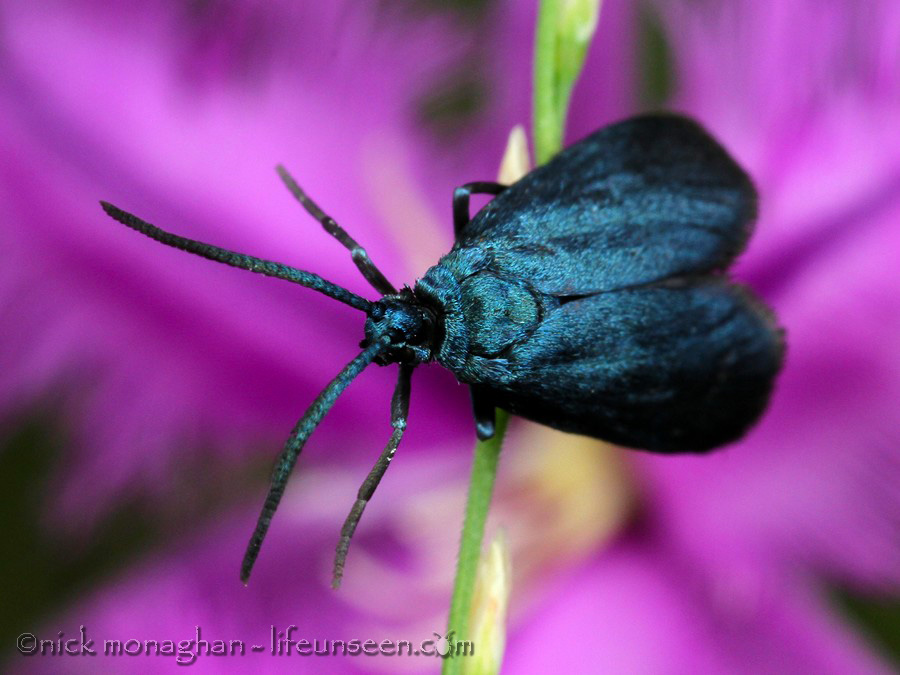 This was one of those rare occasions when everything fell into place perfectly. I had seen several of these moths over the course of a couple of days in the Dandenong Ranges National Park, Victoria, and I was getting a little frustrated after several failed attempts at getting a decent shot. They were intent on filling up on nectar while they had the chance, so they weren’t stopping on any one flower for too long. I managed to get a few reasonable shots, but my lucky break came when I found a moth resting on a grass seed head, and even better, it was perched directly above a delicate, mauve Common Fringe Lily (Thysanotus tuberosus). The moth started getting agitated as soon as I approached, but it hung around just long enough for me to get a single shot. Made my day.

To see these and many more magnificent moths, please click HERE for the moth galleries.