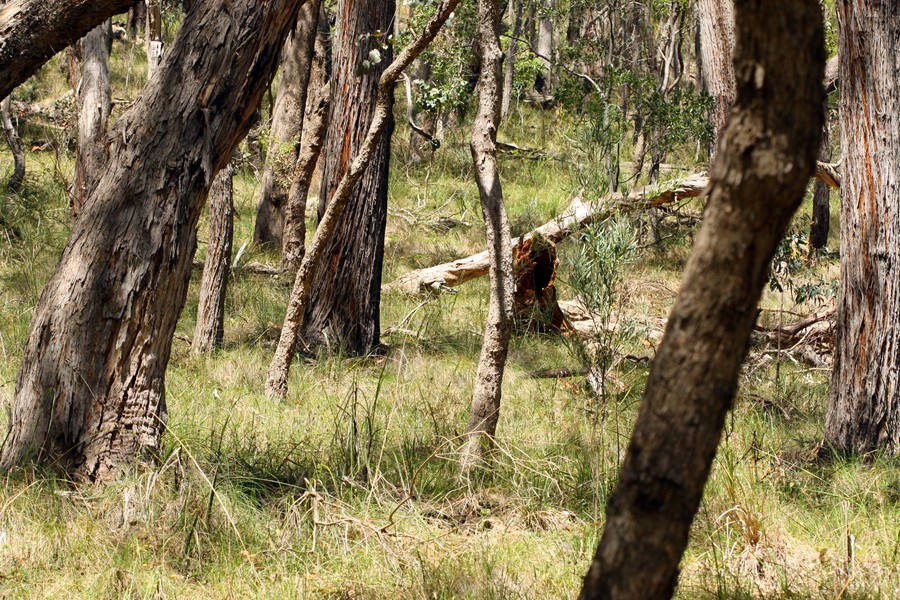 As far as photographic locations go, Dandenong Ranges National Park couldn’t be more convenient for me. The park boundary is only a few hundred meters from where I live, so it’s the perfect place to escape to without too much forward planning.

The park covers an area of approximately 32 square kilometres in Melbourne’s outer east and it protects stands of the majestic Mountain Ash and remnants of temperate rainforest where tree ferns grow in shaded gullies. I live on the western edge of the park at the foot of Mount Dandenong and its twin, Mount Corhanwarrabul, and here it is mostly sclerophyll forest consisting of Eucalyptus and Acacia trees with many different species of shrubs, sedges, creepers and herbs covering the middle and lower stories.

As well as recording the invertebrate wildlife, I enjoy photographing the beautiful wildflowers that add their splashes of colour to the mountains during Spring and Summer. The first sign of things to come occurs in mid to late Winter when the Acacias erupt with golden blossoms. Then, with the onset of Spring, many of the smaller plants start to flower, with October being the month of peak activity. So far I have photographed 50 different types of flowers, including 10 species of Orchids, which I find particularly fascinating. 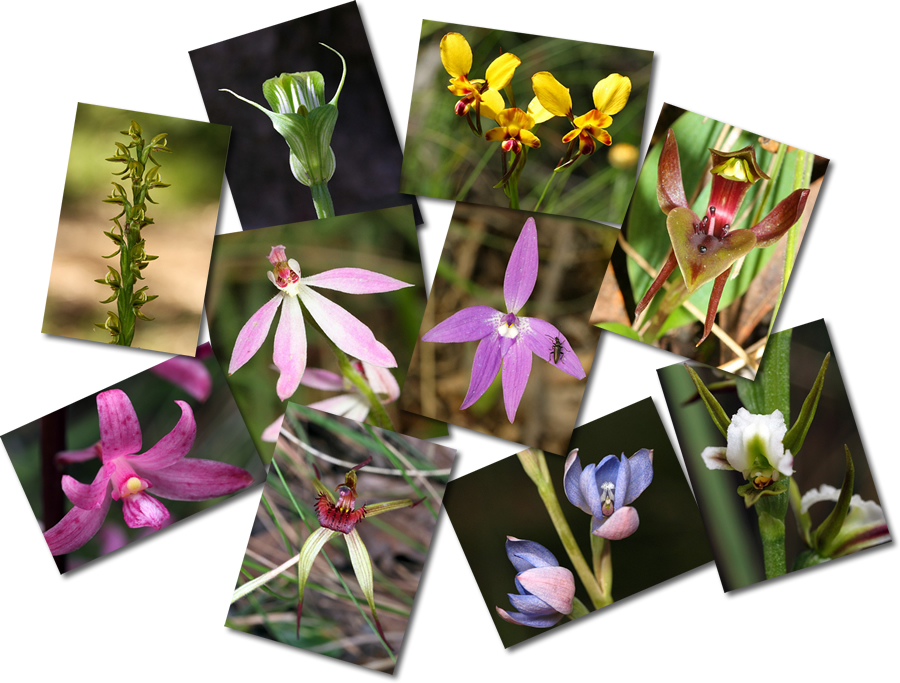 When Winter finally releases its chilly grip, there is a sudden explosion of insect life on the mountains and the park becomes a very busy place for a few months.

Perhaps the most common sights are the various types of butterflies, particularly those belonging to the family Nymphalidae, commonly referred to as Browns. Three or four species can be seen at the same time and they often share the best resting spots. Below is a Shouldered Brown (Heteronympha penelope) and its smaller cousin, a Ringed Xenica (Geitoneura acantha). Both belong to the same subfamily Satyrinae. 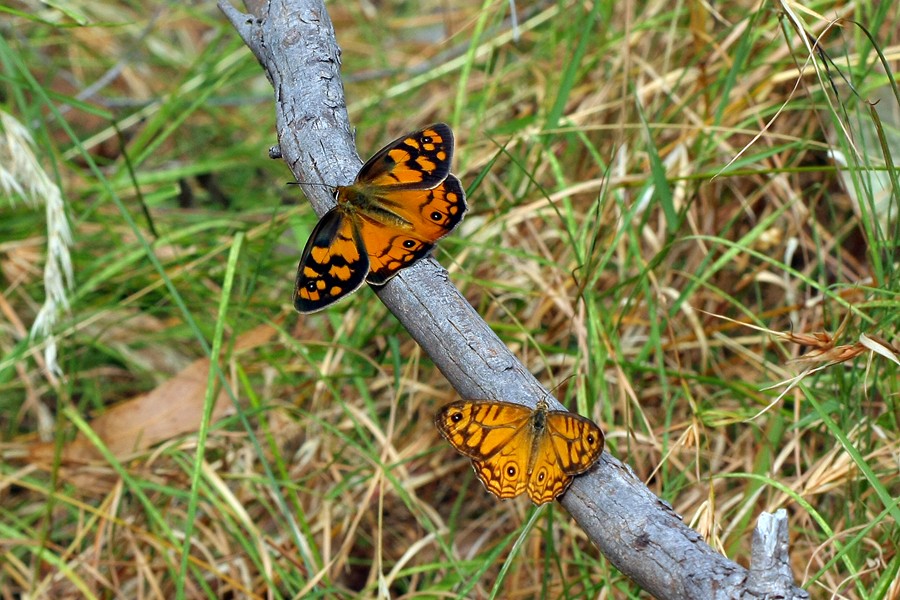 There are also the more solitary butterflies, such as this Spotted Sedge-skipper (Hesperilla ornata) from the family Hesperiidae. I have seen this species on only three occasions in the past 6 years. 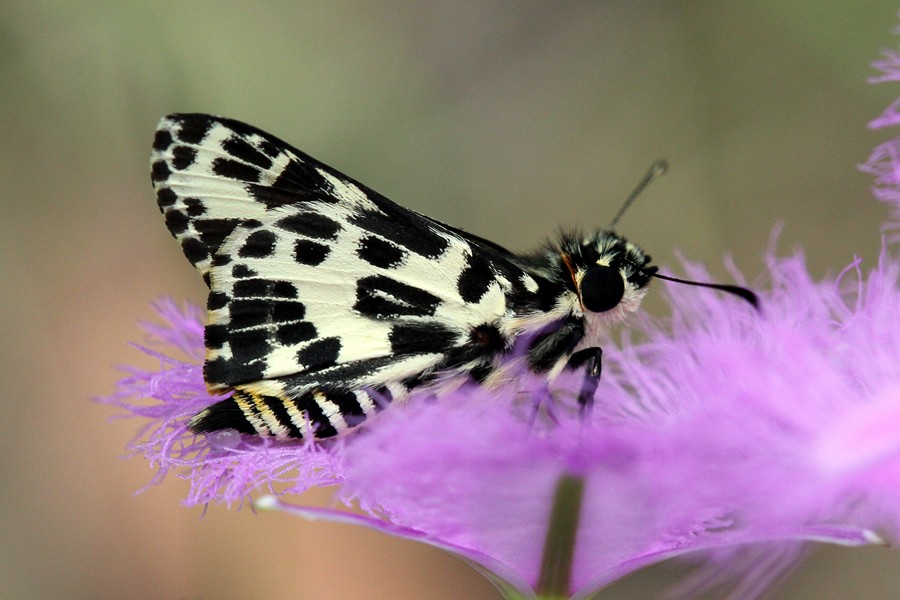 The abundant wildflowers provide a bounty of pollen and nectar for many insects. The Common Hoverfly (Melangyna viridiceps) below, one of many species from the family Syrphidae, has chosen to dine on a Blue Pincushion (Brunonia australis), which appears in small drifts in the undergrowth during Spring and early Summer. 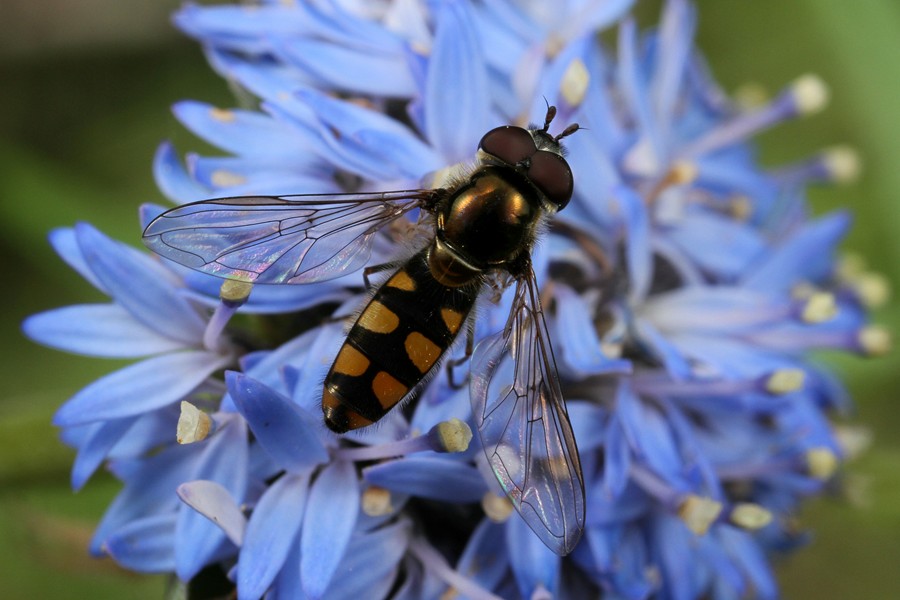 The park certainly contains its fair share of curiosities. There is a diverse collection of fascinating insects called Leafhoppers and Treehoppers, which form part of the order Hemiptera, where you also find the more recognisable bugs and cicadas. Like all bugs, Leaf- and Treehoppers have sucking mouthparts for drawing the juices out of plant leaves and stems. These creatures come in all manner of shapes and colours, but some of the oddest ones belong to the family Membracidae, aka Horned Treehoppers. This Ceraon tasmaniae is a fine example with its impressive horns. 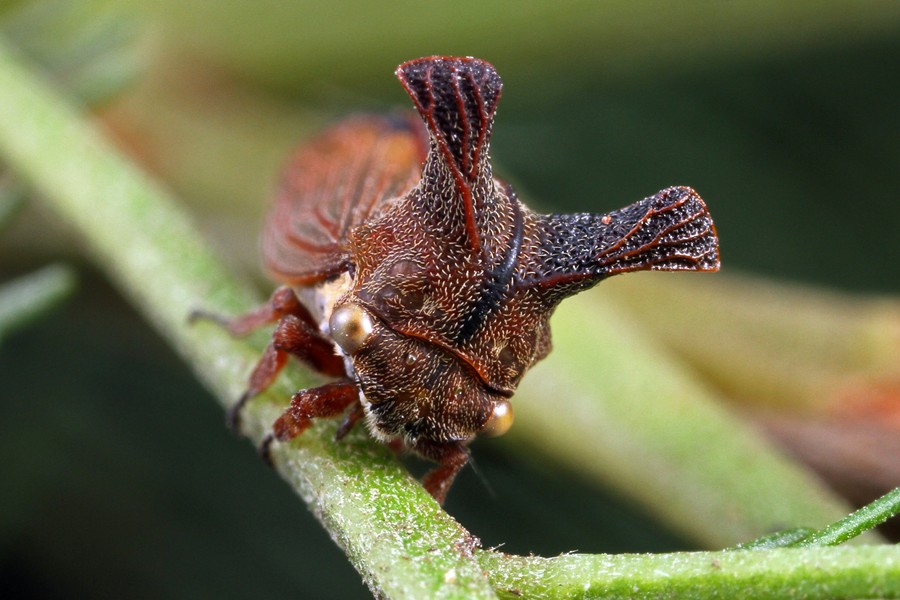 Ants (family Formicidae) can always be seen as they go about their regular foraging activities. They range in size from a couple of millimetres up to a whopping twenty-five millimetres, the largest being the fearsome and aggressive Bullants. Somewhere in the middle of the scale are the Sugar Ants from the subfamily Formicinae. Unlike the Bullants, Sugar Ants lack stings, instead using formic acid for defence and attack. As nasty as this Camponotus intrepidus may look, she is actually quite harmless. 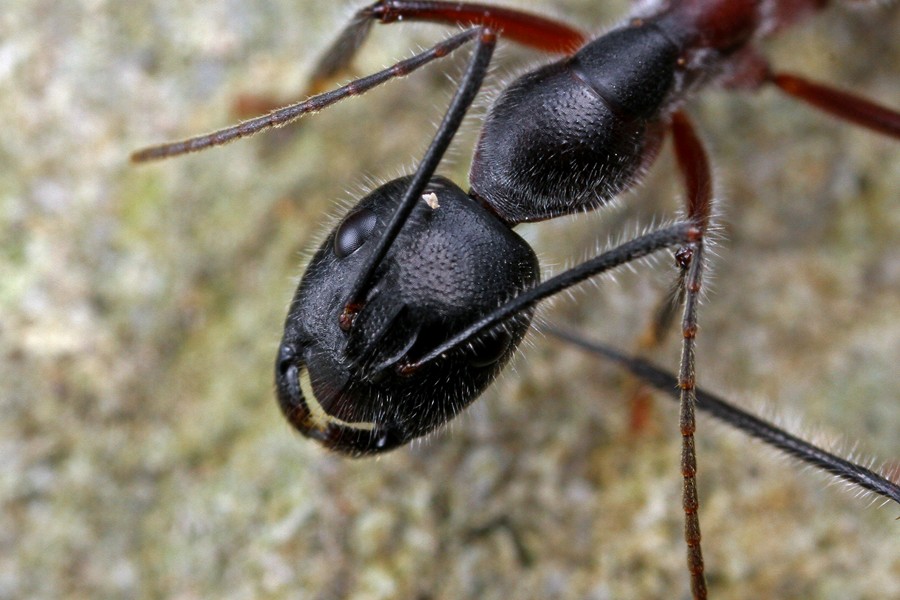 And of course there is always a beetle or two to be found and they seem to fill every available niche, from nectar feeder and leaf eater to scavenger and predator. Some of the most prolific beetles are those belonging to the family Chrysomelidae. These beetles are commonly referred to as Leaf Beetles, which pretty much gives away their preferred food source.

Hispellinus multispinosus is a prickly customer. I’m assuming the role of the spines is to provide protection against predators, but it wasn’t enough to stop a gang of tiny red mites latching on. 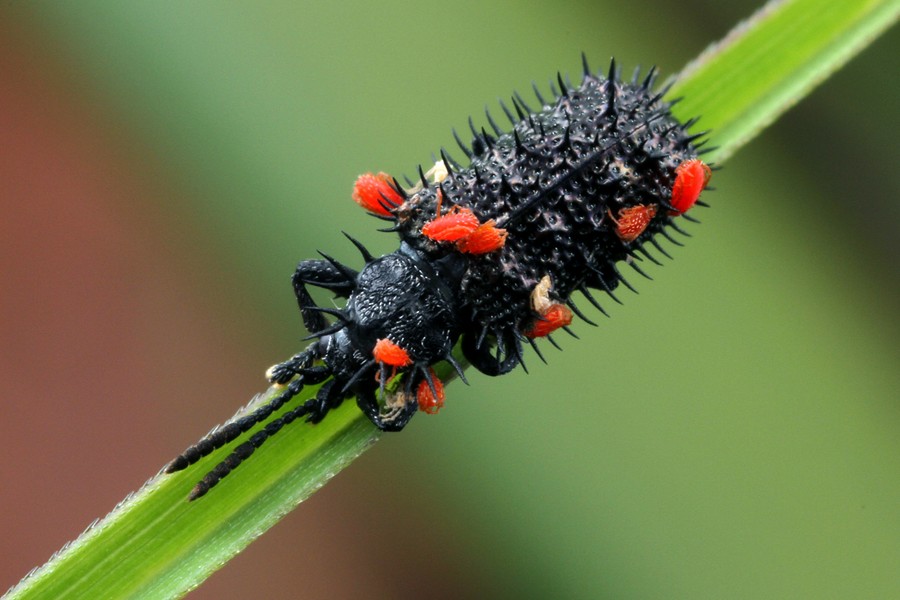 Others prefer a more dazzling approach. The bright metallic colours of this Aporocera species may suggest to predators that it isn’t going to be very tasty, even if that may not be true. 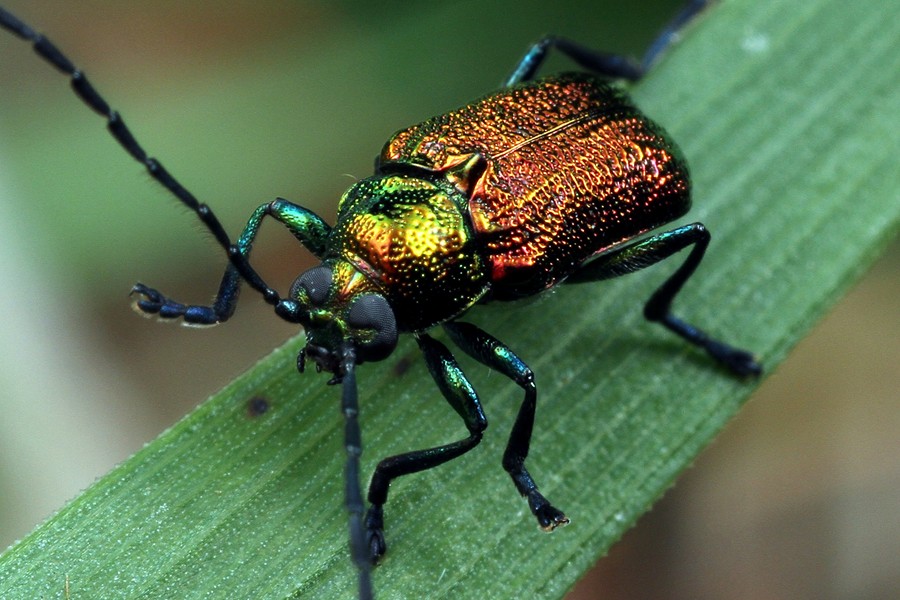 Unfortunately, the invertebrates can be as seasonal as the wildflowers, so from late April through to early September the mountain can seem like a green desert. But even on the coldest days, when the insects and spiders seem to have completely disappeared, there are always a few subtle reminders that life is never far away. 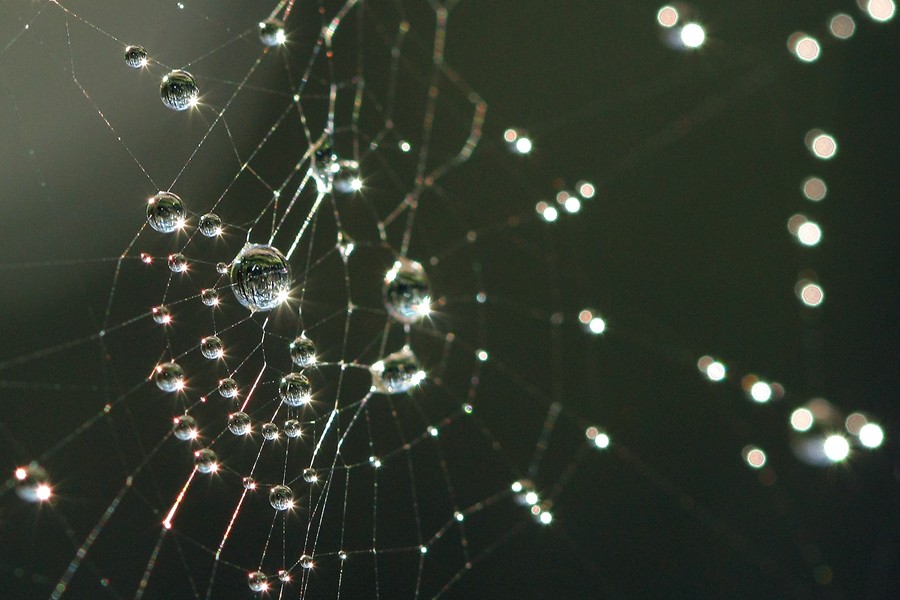